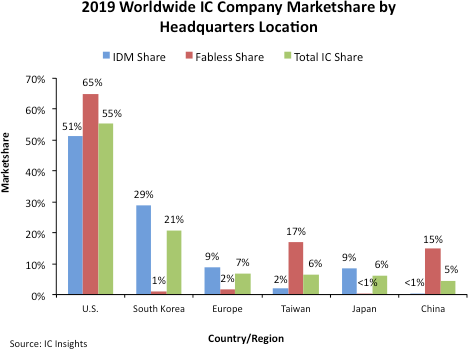 According to a source, in 2019, American chip manufacturers retained their leadership in the global market. This applies to both companies that have their own production, and those who order production from contract manufacturers. In the first segment, American companies accounted for 51% of sales, in the second – 65%. As a result, the total market share occupied by US companies is 55%.

It is noteworthy that South Korean, European and Japanese companies are very few represented in the factoryless segment, while Taiwanese and Chinese companies, on the contrary, rely less on concentrating development and production in the same hands.