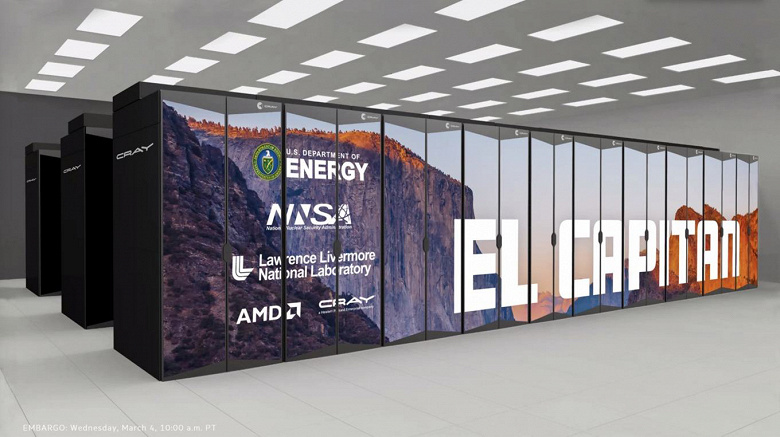 El Capitan will be used for nuclear weapons tasks.
AMD today published a press release in which it talked about the El Capitan supercomputer and its features. Recall, this is an exascale system (1018 floating point operations per second), which is created by order of the US Department of Energy by Cray.

But the most interesting thing is that AMD Epyc Genoa processors based on the Zen 4 architecture will become the basis for this supercomputer! Recall that currently the current AMD processors use the Zen 2 architecture. In fact, El Capitan is the first formally presented product based on processors with the Zen 4 architecture, which will be released only next year. Also, the next-generation Radeon Instinct computing accelerators will be used in the supercomputer, and, probably, the next one will be not relative to the current one, but relative to the one that is only preparing for release (based on RDNA2).

In fact, there is nothing unusual here, because El Capitan will not be commissioned until 2023. It is expected that at the time of its appearance it will be the fastest supercomputer in the world (about 2 ExaFLOPS). You can also make one impressive comparison: El Capitan will be more powerful than the 200 most powerful TOP500 supercomputers to date combined.

Returning to the technical nuances, AMD reports that each El Capitan node, the number of which is not specified, will include one Epyc Genoa CPU and four Radeon Instinct GPUs, united by an interface based on the third generation Infinity Architecture.

Interestingly, El Capitan will be used to solve problems related to nuclear weapons.